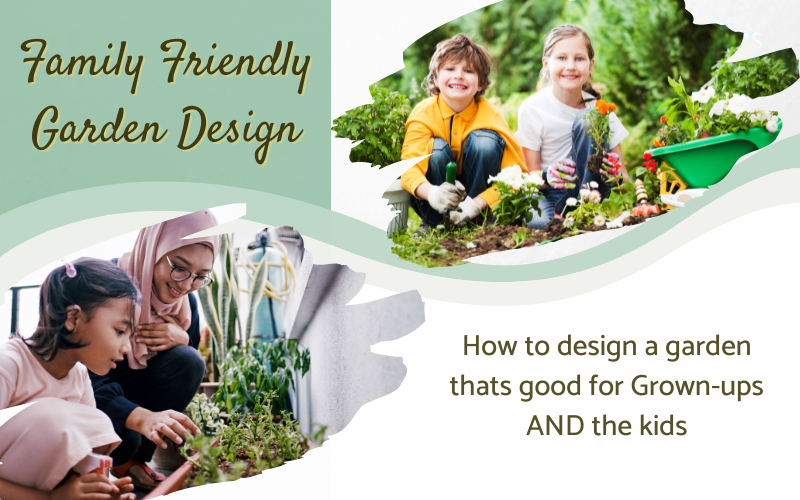 What is a Family Garden anyway?

Is there a formula for creating a family garden design and if so what is it? Well if there was a simple x+y = success, most designers would be out of a job, but the truth is the term family gardens is simply assigned to any garden if it’s used by a family. It is not usually a garden that has been designed for a family, it is a garden which simply has a large lawn. The assumption being the kids will love and want space to run around in.

Use the buttons below to skip to the section you need, or watch our design videos

Planning the Layout
Making gardens fun
How big should a lawn be?
Get Kids growing stuff

Plan the garden around what you enjoy most as a family

OK, so this may seem pretty obvious, but if the garden is going to bring you all outside as a family; then the best way for this to happen is if it allows you to do those activities at home.

This means you need to ditch conventional garden planning conventions and rethink from scratch.

As a family, sit down and write a list of things you enjoy doing outside together, and ask the children what they would like to have. Most importantly ask them what is boring about the garden now; their answers might surprise you.

Accept that you are not going to have a typical suburban garden anymore; but realise what you are gaining is a space that all the family enjoy spending time together in – away from screens, iPhones, Tablets and the PlayStation. It might be you all love watching TV together and if that is your priority, well, find a way to have a screen outside.

We all get bored of the same old things, it is human nature, and gardens are no exception. Your family will evolve too, what the children enjoy doing now, will not be what they enjoy doing in 5 years’ time – so spending a fortune creating a fabulous garden now – will result in a white elephant in a few years’ time.

If you need some design advice for your family garden

Helping you make your garden better

How big should a lawn be?

How useful are large lawns then at providing children space to play and still provide space for you to sit? For a moment then, I need you to consider and evaluate your garden; ask yourself some questions:

Losing the lawn will free up more time 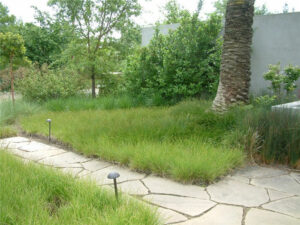 Now this is the biggy; consider ditching a lawn altogether, but I don’t mean paving over it or filling it with a border, what I mean is consider ditching the manicured, mown green grass space you spend time every week cutting…

You can still put a climbing frame on this ‘lawn’ – you just don’t have to mow it,

The only exception to this low-cost rule is the seating area. The sun won’t change where it shines, so the nicest part of the garden to sit in will always be in the same place. The patio will be the only part of the garden that won’t evolve over time but create a patio large enough to be usable, which is now far easier if you aren’t factoring in a large open lawn area.

If the garden is to BE fun - think like a child

For gardens to compete in the modern world, gardens for kids need to be more fun.

So, decide if the garden is mainly your space or will be an interesting space for the kids.

Gardens are created by adults but used by children.

The problem is we create gardens for adults, and hope the children will like using them.

Our gardens made are lovely and have borders and lawns, patios and pergolas and are perfectly functional outside spaces. But from a child’s perspective, what is the garden really like?

Childhood has changed, garden sizes have shrunk and the virtual world of the screen has captured all of us. Gardens no longer are interesting enough to want to be in if you are a child. The Xbox and PlayStation have much more exciting worlds to ‘play’ in. These worlds have dragons and dinosaurs, excitement, and danger and can be explored endlessly. If I were a child now, I wouldn’t want to sit in the garden and play swingball. I’d be immersed in the excitement of the screen too.

Now there is nothing inherently bad with computer games, the problem lies in the game’s ability to entertain for hours on end. The garden just cannot compete, it is a garden for adults not a garden for kids.

Consequently, when we say to go outside in the garden and play, the child sees it as almost a punishment, there’s nothing to ‘do’ outside! The garden doesn’t excite them.

The Duchess of Sussex was absolutely on the ball with this, with her garden at the Chelsea Flower Show.

She clearly understood the positive benefit being outside had, not just because children are outside being active. But because their minds are not being fed a constant stream of ‘brain goop’ by the screen. Children need to use their imaginations.

Children have no need to be bored anymore because the screen can instantly fill their minds with excitement. But it’s addictive and in the long term will not help them.

Now my childhood had lots of boring days, however, boredom is actually necessary for children’s brains to learn to be creative. It is the passive ‘feed me constant entertainment’ which is the real problem affecting our children’s development.

We need to get kids engaged more with nature and the world outside, the problem is how. If you have a small urban back garden, how do you create a garden your kids will love?

We were all children once, we just have to remember how we played. It is how children still play now albeit electronically. They still run and jump, hide, play ‘bang-bang you’re dead’ games, and make forts and dens. Kids still have imaginary friends, it’s just this is increasingly a virtual experience.

The garden then needs to have places where the child can do all these activities for real. Bring a little excitement back in the garden. But in order to compete with electronic excitement, we need a bit of risk and danger.

When I was a child my father made a death slide. He strung a rope from the upstairs window and cut a hole in a washing-up bottle to act as the sliding grip. We stood on a step ladder, grasped the bottle and slid to our deaths down the slide.

Our bums got scuffed on the grass as we landed, fell off once or twice, and got a couple of bruises; but aged 6 it was fantastic fun. We were allowed to climb the tree at the bottom of the garden. But we were told to always have 3 points of contact before moving an arm or leg. This ensured we learned to take risks in a managed way.

The point is it didn’t need to be an expensive playground. In fact, makeshift and made by Mum and Dad IS what made it fantastic!

My brother and I did fall out of the tree, but only because we tried hanging off it like Tarzan. We learned Tarzan could only swing through the trees in films and not in real life. I survived, as did my brother!

Accept there will be mishaps

Now I am not advocating the absolution of parental responsibility, our role is to introduce excitement without stupid risks. It is also to accept that our kids will get dirty, eat worms (me) or possibly bird poo, (my younger brother who is now a Professor of Astrophysics), fall in stinging nettles and get a bit bruised. Maybe it’s best to not put a trampoline on a concrete patio. But why not put the slide under the tree, so kids have to climb the tree to go down the slide?

The easiest way to get engagement and interest is to ask. In my garden, the path was created with a slight slope. It was more fun on skates, skateboarding and when learning to ride a bike. Another really simple idea is to have a grass mound. If a space is left for a plank, then all of a sudden the mound becomes a launch pad for learning BMX bike tricks.

Imagine, when your buddies came round to play, you could all do those things because you were allowed to in the garden. The imaginative play would spawn itself, dens would appear. Maybe even a campfire; which even in a small garden is possible achievable and doable.

The restrictions on the kid’s play are created by us. “Don’t kick a ball into the flower beds. Don’t climb on the shed roof, you could fall off. Be careful. Don’t do bike tricks on the grass it messes it up!”

Toys are brightly coloured, plastic and put away after use; the garden needs to be tidied like the house is.

The patio is the adult space, the rest is for the kids

Gardens aren’t forever, they need to change and evolve over time

If you want to get the kids outside and off their screens you need to think more radically about your garden and the role it needs to play. It needs to be an interesting enticing space; a garden for kids.

Grow your Own - with Kids!

Grow your own is great, but if we read all the articles on homegrown food, the impression given, is one of an idyllic family, growing perfect veg and only ever harvesting on a beautiful sunny day! The reality is not quite like that though

Children love the idea of growing stuff, but their attention spans can be quite short. So although, the intention is that they get involved in watering and picking the produce, often the reality is; they don’t.

Plus the problem with vegetable patches is what happens after you have picked the produce. Let’s face it growing produce is functional, not pretty. Once the veg has been picked or is picked, often the plants and the vegetable growing area look pretty unattractive.

So some tips for growing food to eat in the garden- if you want the kids to join in:

This may sound a bit defeatist, but think of it as easing yourself and the children into growing fruit and veg. By starting small you manage your growing expectations more sensibly.

Grow your own in a small garden will not ever provide enough food for lots of family meals, but that’s not the point of it.

The point is your children start to make a connection with where their food comes from, with how nature works and how they can enjoy being outside in the garden more.

And that will help make your garden a wonderful space for all the family to enjoy.

If you need some design advice for your family garden

Helping you make your garden better 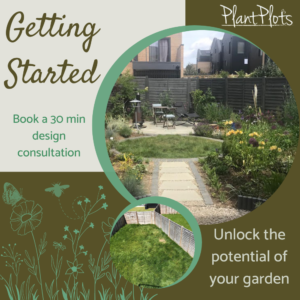 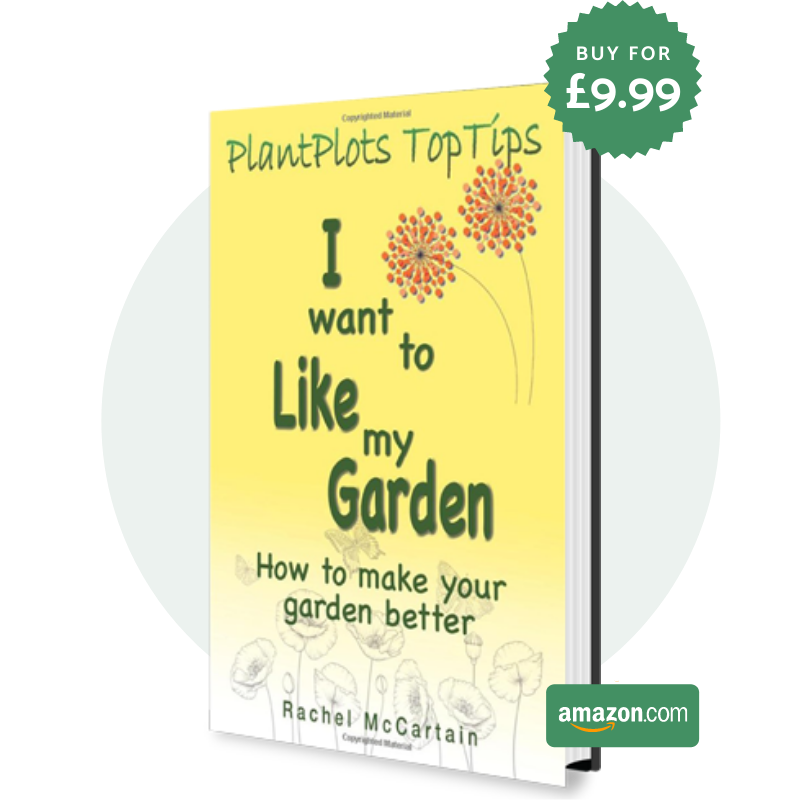 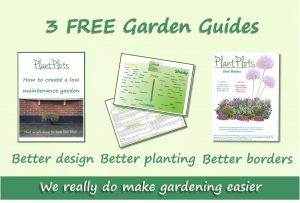 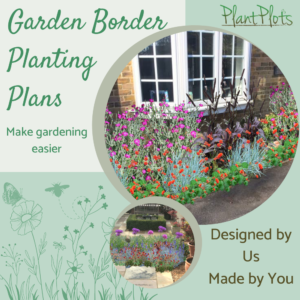